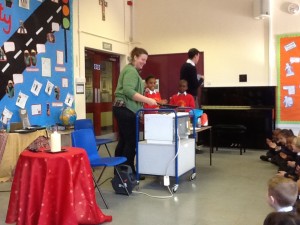 Shrove Tuesday is a day of celebration as well as penitence, because it’s the last day before Lent. Throughout the United Kingdom, and in other countries too, people indulge themselves on foods that traditionally aren’t allowed during Lent. Pancakes are eaten on this day because they contain fat, butter and eggs which were forbidden during Lent.

During our assembly, Mr Rojas reminded us about the origins of Shrove Tuesday and we discussed things we could give up or start doing while Sara cooked a pancake from scratch, with the help of pupils.

The pancake was flipped in front of the whole school and lucky Miss Godsell ate it with a special caramel sauce from Argentina known as “Dulce de leche salsa”!

How will you be observing lent this year?