At Cathedral School we aim to inspire children to be passionate about the past and what we can learn from it. Children are encouraged, not only to learn the facts about History but to consider how it affected the people who lived it and its impact on our lives today.

We bring history to life, ensuring children are really connected to the past through a range of artefacts, texts and visits such as to the Tower of London, The Imperial War Museum, Hampton Court Palace, the Churchill war rooms and Kensington Palace.

Children also learn about the history of our local area, for example through events at the Old Vic Theatre and Southwark Cathedral. We make strong links to Literacy through the reading of historical novels and though non-fiction research.

Through these trips and the experiences they have at school, children are able to identify many different ways they can learn about the past as well as considering how history might be viewed differently by different people. They share their knowledge and understanding in a range of engaging ways such as through composing biographies about World War One poets, writing their own version of Queen Victoria’s Coronation speech and through describing historically accurate scenes and diary entries.

Here are just some of our experiences of leaning History at Cathedral School:

A visit to the Imperial War Museum:
“Today we visited the Imperial War Museum to explore their WW1 exhibition. We have started our WW1 topic in class and it was useful to see artefacts and watch informative clips of what life was like during The Great War. We got to experience life in the trenches and see the real weapons and uniforms the soldiers were given. The visit also reminded us about how dreadful war is and what sacrifices were made during this difficult time.” 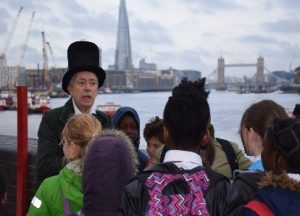 A visit to the Brunel Museum:

“Our guide, none other than the great engineer himself, Isambard Kingdom Brunel, was superb.  We toured the wharves (Singular – Wharf – WareHouse At River Front) along the Thames and then to the Engine Room, which is the site of the museum.  We even saw the hole down to the tunnel where Brunel almost died.  We finished the tour with a train ride underneath the Thames to Wapping, through Brunel’s Thames Tunnel. The oldest tunnel in the oldest underground network in the world.”

A study of Victorian Pottery in Art:

“This half term, we have been looking at Victorian pottery. Using Victorian designs as inspiration, we created our own piece of pottery using clay. Once they had dried, we then painted them using repeating patterns.”

Writing our own pieces of Historical Fiction and demonstrating our knowledge of what life was like:

“Oliver Twist scurried eagerly down the cobbled road, going as fast as his stick like legs would take him, as he tried to keep up with Jack Dawkins, a boy with plump hamster cheeks and an impish grin. He looked very queer, as he strolled down the street, due to his shortness and his plumpness. Also, the mad thing was, he was wearing a red velvet waistcoat and a long black tailcoat that trailed past his knobbly knees. Oliver wondered whether they would be spending the time sewing wallets, stitching gloves or embroidering handkerchiefs, when suddenly, Jack’s glittering eyes caught sight of Mr Brownlow, a rich gentleman, who had his wallet peeking out of his back pocket…”

“The house was silent. All that could be heard was the heavy breathing of the Watson’s children tucked up in their beds. Little did they know, but flying in the sky above Warsaw, was a group of German fighter pilots. They swooped through the sky hidden by a thick curtain of clouds. An army of bombs cascaded down from the night. All of a sudden, hundreds of explosions went off at once. Fountains of fire shot up into the air like orange fireworks slowly fading into the darkness.”

“Lucy Watson woke up with a start. The ceiling had collapsed on top of her, a huge cloud of dust floated up into the air. She scrambled out of the rocks to try and find her siblings. First, she found Gretle, she was the youngest and only three years old. Then Lucy was ten, and then her brother, Peter, was the oldest at twelve years old. Lucy lifted up Gretle and struggled over the ruins until she found Peter. They were all relived that they had survived the bombing. If they hadn’t been sleeping in their cages they would’ve been killed.”

“It was September, 1942 and the war was getting worse…

Peter woke up to the sound of German voices shouting in the room next door. FATHER! He stood up, startled and ran to the door. It was locked. He darted to the cupboard and took out his rifle, he then pressed his head against the door and listened…

“Mr Thomas Smith, under the command of Hitler himself, we have been ordered to take you away to the German camp Shenael.” Peter froze. His face turned pale and a sickly feeling grew in his tummy.”

Learning about how and why the Tower of London was built in Year 2:

“This term in history, we are learning about the Tower of London. This week, we learnt about William the Conqueror and the Battle of Hastings in 1066. The first part of the Tower was built soon after, in 1078.

We wrote letters from William the Conqueror to his builders, instructing them to build him the fortress.

Dear Builders,
I would like you to build me a fortress because I would like to keep those little London pests out. It should be built in London near the sea. It should be made from strong stone. The walls should be exactly ninety feet tall and fifteen feet thick. I’m writing this letter because I can’t come to London until the fortress is built. The windows should be so thin that only an arrow can fit through. There has to be a castle in the walls that is called The White Tower. Some of the stones should be from Normandy.
From King William the I.
(by Grace)

Dear Builders,
I need a castle built just outside London. I need it to have two hundred and ninety six steps on the stairs. The windows will be thin and it will be ninety feet tall. The walls will be fifteen feet thick. The stone will be from Normandy. There will be a huge wall around it with jails. I want those filthy Londoners thinking I’m strong and that I’m a good king.
From William the I.
(by Josh)”

A visit to the Museum of Childhood:

“We had a great trip to the V&A Museum of Childhood last week. Children found out about a range of toys from the past and enjoyed their time playing with them whilst asking questions about how they were made and how they differ from our toys today.”

A high-quality history education will help pupils gain a coherent knowledge and understanding of Britain’s past and that of the wider world. It should inspire pupils’ curiosity to know more about the past. Teaching should equip pupils to ask perceptive questions, think critically, weigh evidence, sift arguments, and develop perspective and judgement. History helps pupils to understand the complexity of people’s lives, the process of change, the diversity of societies and relationships between different groups, as well as their own identity and the challenges of their time.

The national curriculum for history aims to ensure that all pupils: