Congratulations to Year 5 who took part in a drama project with the Menier Theatre on Union Street. As part of the project they worked with staff from the theatre including a musical director and movement coach to write and perform their own creation called “We’re What’s Happening”. The show was inspired by Sondheim’s The Assassins which is currently on at The Menier. Class 5’s performance was based around people who are positive influences in their lives and included songs from the show. The performance was stunning and the director from The Menier said afterwards, “I have to say, after years of working in primary schools, that is was a pleasure to come into Cathedral Primary every week. It does feel like a special place to be, and your pupils are a testament to that.” If you would like to see photos and video clips from the show please visit the Class 5 blog. 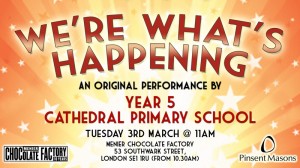